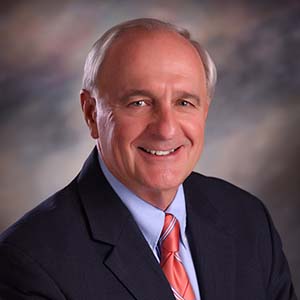 Mike Simpson and his wife Sandy moved to Frisco, TX in January of 1997.  His career prior to coming to Frisco included 34 years in sales and marketing with a Fortune 500 printing equipment company. He reached levels of Vice President of Sales and Vice President of National Accounts during that time.  In his 25 years in North Texas, he held positions with Moore North America and Gateway (now Prosperity) Bank before becoming Executive Director for the Arts of Collin County, an organization created by the cities of Allen, Frisco, and Plano to build a Performing Arts Hall.

He was on the Frisco City Council from 2000-2002 and elected Mayor of the City of Frisco in 2002 and re-elected in 2005, serving a maximum of 6 years due to term limits.  During his years as Mayor, Frisco grew from 50,000 to 101,000 people and set the stage for continued growth that now is over 200,000.  During his mayoral years Frisco built a new City Hall and Library, Police Department, Central Fire Station, Safety Town, Senior Center, Athletic Center, and Heritage Center as well as major infrastructure to handle future growth.  He was President of the Metroplex Mayors and on the Regional Transportation Commission and North Central Texas Council of Government.

He was named 2004 Citizen of the Year by the Frisco Chamber of Commerce, 2009 Person of the Year by Frisco Style Magazine and received the DBU Tom Landry Leadership Award in 2009. Mike was also named in 2008 to the 21 Leaders for the 21st Century.

In 2012 he became the CEO of Boys & Girls Clubs of Collin County and served for over 8 years growing number of youths served by almost 100%.  Mike and wife Sandy will be married for 59 years in August and have 3 children and 5 grandchildren.